Examples of Art Restoration and Conservation

Restorers can use chemical methods to repair artwork and prevent further deterioration. Chemical properties can be used to remove grime and old varnish, as in the Sistine Chapel. They can also be utilized to remove unwanted patinas and deposits, as with the Equestrian Statue of Marcus Aurelius.

Restoration of the Frescoes in the Sistine Chapel

Since their creation, Michelangelo's frescoes in the Sistine Chapel were exposed to dirt, soot, and pollution, which darkened the images. Animal glue on the surface of the frescoes attracted this grime and deteriorated itself, further obscuring the frescoes.2 Restorers had to decide how many layers of these substances on the frescoes to remove, a controversial topic.

Before beginning, restorers analyzed Michelangelo's frescoes. Using cross-sectional analysis, they found that there was dirt and soot underneath the animal glue and determined that it was used in previous restorations, probably as a varnish.2,3 Over time, the animal glue had decayed and darkened. Restorers decided to remove the glue as well as the grime. They tested cleaning solutions on small areas of the frescoes and eventually decided to use distilled water and the cleaning solution AB-57.2 This solution includes ammonium bicarbonate (NH4HCO3), sodium bicarbonate (NaHCO3), Desogen (to reduce surface tension and act as an antibacterial), and carboxymethylcellulose (to control viscosity).2 When applied to the surface of the frescoes in gel form, the solution loosened the grime and glue. This left a mixture that was sponged and washed away after three minutes.3 Although the glue and dirt did not mix with pure water, they mixed with the solution because of the added cleaners. The cleaners also did not damage the frescoes since they did not mix with or remove any pigments.2 In the end, the restoration revealed the colors of Michelangelo's work.

Figure A: The Fall and Expulsion of Adam and Eve from the Sistine Chapel, the upper left before restoration and the lower right after restoration 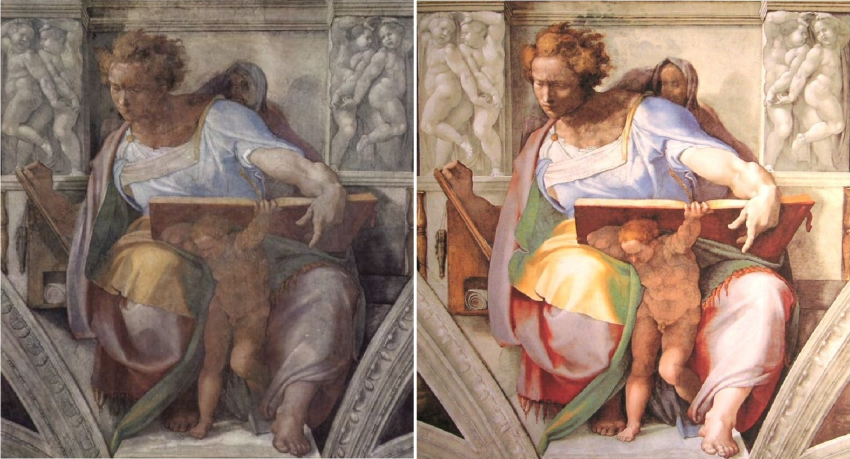 Figure B: The scene of the Prophet Daniel from the Sistine Chapel, the left before restoration and the right after restoration

Restoration of the Equestrian Statue of Marcus Aurelius 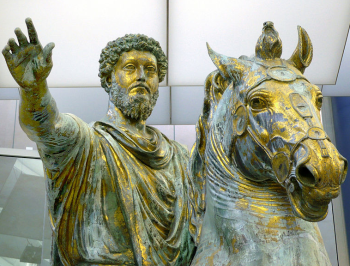 Figure C: The statue after restoration, with gilding revealed and a stable patina on the bronze

From 1538 to 1981, the Equestrian Statue of Marcus Aurelius was the centerpiece of the Capitoline Hill in Rome.4 Originally created during the Roman empire, the statue is made of bronze and gilded with gold.4 However, exposure to the elements, particularly pollution in Rome, caused the statue's surface to deteriorate. The gilding was worn away from many areas of the statue, allowing the bronze beneath to react with the air. These reactions produced differently-colored compounds that built up to detract from the appearance of the statue. 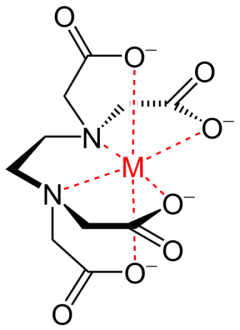 Restorers tested various solvents to find their efficacy in removing these patinas. They washed areas with demineralized water and performed cleaning tests with seven reagents to test their efficacy removing the known patinas.4 Based on the tests, they treated the statue's coating with deionized water, 0.5M EDTA trisodium solution, saturated ammonium tartrate solution, and acidic cation-exchange resin.4 This removed most of the coating, except for some parts which needed to be manually scrapped away.4 The restorers could not repair small fissures in the statue which exposed the interior to corrosion (forming cupric chloride) because it would require disturbing the remaining protective patina and changing the appearance of the statue's surface with a sealant.4 Still, in the end, the gilding was not damaged and the accumulated patina was removed to reveal details of the statue.4 View a detailed report of the restoration process to learn more.

The restoration of the Equestrian Statue of Marcus Aurelius relied on chemical principles. Demineralized water was used to dissolve and remove soluble salts. The other reagents "dissolved" the insoluble components of the coating. EDTA, ethylenediaminetetraacetate, is a chelating agent, meaning that it forms multiple bonds (in this case, 6) with a metal ion to create a complex ion.5 It could be used to remove patinas since it bonded with metal ions from the minerals to form complex ions. This process left aqueous ions that could be washed away in place of the insoluble compound.